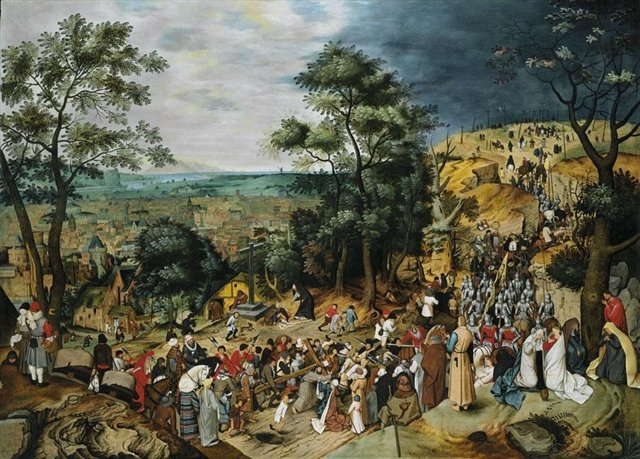 The Procession to Calvary by Pieter Brueghel the Younger

The elder son of Pieter Bruegel the Elder’s was also named Pieterand was just five years of age when his father died in 1569.   The death of his father left Pieter, his young brother Jan and sister, Marie to be brought up by their mother Mayken Cooke van Aelst.  After their mother died in 1578 the two boys went to live with their maternal grandmother Mayken van Hulst, who was an accomplished miniaturist and watercolour painter in her own right.  It is from her that the boys received their initial artistic tuition.  Very little has been written about Pieter Brueghel but Karel van Mander a Flemish-born Dutch painter and poet, who is mainly remembered as a biographer of Netherlandish artists and was a contemporary of Pieter Brueghel the Younger, records that when Pieter was nine years of age the family moved to Antwerp and it is believed that here, Pieter received his first formal artistic training under the tutelage of the Dutch landscape painter, Gillis van Coninxloo III.  When he was twenty years old he became a member of the local Guild of Saint Luke and was registered as an “independent master”.  In comparison to his younger brother, Jan, Pieter was less successful as an artist.  He ran a studio, which had many apprentices, including Frans Snyders, who was to become one of the foremost Netherlandish painters of animals and still-life.  The problem for Pieter was that his paintings although they sold well, were sold cheaply.  The main reason for this was the fact that a lot of his works were copies or imitations of his father’s works.  Art critics have pointed out that his works had neither the depth of his father’s works nor the refinement of the works of his younger brother Jan.

At the end of 1588 when he was twenty-four he married Elisabeth Goddelet and the couple went on to have seven children.  Pieter Brueghel the Younger painted landscape and religious paintings as well as his fantasy paintings in which he liked to depict hobgoblins, fires, and other grotesque figures and it was his love for this sort of work which made him known as “Hell Brueghel” in stark contrast to the nickname, “Velvet Brueghel” given to his brother Jan for his concentration on still-life flower paintings.  Pieter Brueghel and his apprentices spent a lot of time copying his father’s works of art.  He and his studio produced more than sixty copies of his father’s 1565 painting entitled Winter Landscape with Skaters and a Bird-trap.   Pieter Bruegel the Elder’s painting entitled The Adoration of the Magi in the Snow, which he completed in 1567, was copied by his son in 1600 and was just one of almost thirty copies of the painting which came from the studio.   A painting simply entitled Proverb,s which can be found at the Rockox House museum in Antwerp is a copy of his father’s 1559 painting Netherlandish Proverbs which is housed at the Staatliche Museen in Berlin.  A great number of his paintings featured peasants and their daily lives, just as his father had done years earlier.

My featured painting today is one which Pieter Brueghel the Younger completed in 1607 entitled The Procession to Calvary.  It is a prime example of young Pieter Brueghel attempt to copy one of his father’s great works of art of the same name which was completed in 1564.  The painting which was owned by Lord St Oswald had hung at the family seat of Nostell Priory in Wakefield, West Yorkshire for over two hundred years.  However although the building is now owned by the National Trust the contents belong to the St Oswald family and they wanted to sell the work.  Through the auspices of the Art Fund, The National Heritage Memorial Fund and various monies received from the public, trusts and other foundations the painting was bought for £2.7 million and will now remain at the Priory.

The painting is deemed to be one of Brueghel the Younger’s best works.  His setting for the biblical scene illustrating Christ’s journey to his own crucifixion atop Mount Calvary is a Flemish landscape and is full of fascinating details. The background of the painting is a vast landscape with a river estuary slowly meandering towards the open sea which we can just see on the horizon.  In the left mid-ground we see a city with all its multi-storeyed buildings.  This is not a mystical biblical city from the Middle East but a European cityscape.  I love the details the artist has given the buildings.  People of Flanders who saw the painting could relate to the scene.  Brueghel has not only painstakingly depicted the city but he has spent much time depicting the people and the everyday objects that he has included in the painting.

Look to the right and you can see a troop of soldiers leading the procession up the hill , escorting Christ on his last journey.  Note their armour.  It is modern.  This is not a depiction of Roman cavalry.  This is a depiction of the troops of the Spanish army similar to the ones who had sacked Antwerp in November 1576 when Pieter Brueghel the Younger was just twelve years of age.  Maybe the atrocities of the war between the Catholic Spanish and the Protestant Netherlands affected the young boy and his painting is not just a tale of Christ’s suffering at the hands of the Romans but a tale of his people’s suffering at the hands of the Spanish.

If we look to the top of the hill we do not just see the three traditional crosses which were part of the biblical tale.  What we see is a mish mash of gallows and gibbets.  These would not be unusual sights set outside the city walls at the time of Brueghel.  Public executions were quite common at the time in the Netherlands and as in the days of Christ’s crucifixion, such executions were often attended by the local population.  Ahead of the Spanish troops we can just make out the two thieves being transported in a cart towards the top.  Unlike the biblical tale of the two thieves carrying their crosses like Christ, Brueghel has shown them being moved in carts, which was how those who were to be executed in Brueghel’s day were moved towards their place of execution.

It is also interesting to note how Brueghel has depicted Christ bearing his cross.  He is just a non-descript figure dressed in grey and hardly stands out from the crowd.  He is not the centre of attention in this sprawling painting and yet he has the leading role in the story.  What of the onlookers?  Are these all depicted as wracked with grief mourning the imminent death of Christ?  I would suggest that Brueghel has portrayed the scene differently from what we are used to seeing.  I believe there is a passive air about the crowd which maybe reflects more the contemporary Netherlandish life when executions were commonplace and caused little outpourings of grief except from the immediate next-of-kin.   This is more of an everyday scene than a portrayal of the events of Good Friday.

Take a look at this painting and compare it with the one done by his father which I featured in My Daily Art Display of March 7th.  See which you prefer.