The artist I am showcasing today, Mary Adshead, was an exceptionally gifted person. She was an artist who moved seamlessly between easel painting and murals.   She was a portrait painter.  She painted on furniture and glass.  She was a postage stamp designer.  She was a book illustrator and devised and designed advertisements and stage sets but will probably be best remembered as a muralist.

Mary was born in Bloomsbury, London, on February 14th, 1904. She was the daughter and only child of Stanley Davenport Adshead and Annie Adshead. Her father was a well-known neo-Georgian architect and talented amateur watercolourist, who trained in Manchester and London and for four years was clerk of works for the vast mansion at Rosehaugh, Argyll, during which time he met his wife, Annie, who was the village school mistress. In 1909, Stanley became Associate Professor of Civic Design at the University of Liverpool, and in 1912 became the Lever Professor of Civic Design. He moved back to London in 1914 and became the first Professor of Town Planning at University College, London, and remained there until his retirement in 1935.

From the age of six, Mary was determined to become an artist and spent much of her time drawing and she produced many sketchbooks of cartoons and illustrations to stories.  The family would spend their summer holidays in the New Forest. Her mother and father’s relationship was often stormy and Mary found herself acting as a go-between, passing messages from one parent to the other.  At the age of twelve, she attended Putney High School and remained there for three years.    At the age of fifteen she went to Paris with her mother and both lived in a hotel in the French capital for six months whilst Mary attended the Lycée Victor Dury.

Whilst in Paris she visited many of the famous art galleries and was greatly influenced by the murals of Pierre Puvis de Chavannes.  In the Autumn of 1921, when she was seventeen years old, her father took her to meet Henry Tonks the principal at the Slade School of Art, which was part of the University College, London, where Stanley Adshead was a professor.  Henry Tonks, a former surgeon, had a reputation for being very harsh with his students and a fierce taskmaster.  Mary brought along a portfolio of work which she had put together whilst in Paris but Tonks was not impressed.  However through a lot of arm-twisting by her father Tonks agreed to allow her to enrol on his art course.  This was a great relief to Mary and her father who, because he was a professor at the UCL, would not have to pay for his daughter’s tuition.

During the early phase of her course Mary did not work as hard as she should and was happy to hang out with a set of wealthy girls who looked on the art and course as simply a pleasant hobby.  Soon she realised that she was wasting valuable time and began to knuckle down and Tonks began to be very impressed with her work. Mary and fellow student, Rex Whistler won the joint first prize in the Slade’s Summer painting competition in 1924 and as a result, when their time at the Slade came to an end, Henry Tonks arranged for them to undertake a joint mural commission at the Highway Boys’ Club in London’s East End.

Once she had completed that commission, more followed and her next one, in 1924, was to create a mural based on a desert island theme, which became known as A Tropical Fantasy. It was commissioned by Charles Reilly, the professor of architecture at Liverpool University, and one-time colleague of Mary’s father.  It is now housed at the Liverpool University Victoria Art Gallery. It is one of just a few of her murals to survive. That same year she completed a large mural entitled The Housing of the People, which was exhibited at the 1924 British Empire Exhibition at Wembley.

She designed posters for the Underground Group and London Transport in the period 1927-37 and also carried out decorative works at Bank and Piccadilly Circus Underground Stations.

One of her most lauded and often considered as her finest work was a commission she received in 1928 from Lord Beaverbrook, the millionaire Canadian-British newspaper publisher and politician, for a mural to cover the walls of his dining room at his Newmarket House, Calvin Lodge. He had decided that the mural should depict scenes of Newmarket life such as the horse racing and the fair and should depict his well-known and famous friends and it was that last instruction which was to be the stumbling-block to this project.

The resultant panels, collectively titled An English Holiday, were true masterpieces combining humour with an insight into a life of privilege and elegance. They were described at the time as being in ‘the manner of English 18th-century sporting prints and acquatints. The paintings were packed with activity.

In Village Inn, a gentleman cyclist flirts with a country maid. In another one we see Arnold Bennett playing the harmonium for a crowd of gypsies. In another we see Lady Louis Mountbatten waiting by her car, the tyre of which had punctured and is being offered assistance by a swaggering, bearded character who looks very much like the painter Augustus John. More bizarrely Churchill is depicted astride an elephant. All of the characters are making their way to the Newmarket racecourse to meet Lord Beaverbrook. 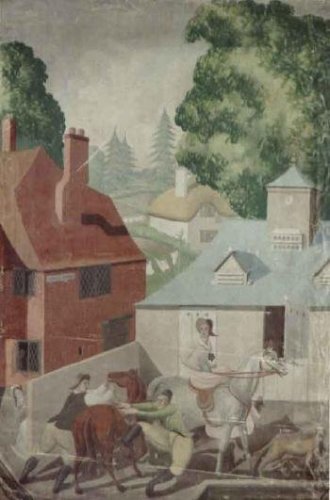 However, Lady Diana Cooper, a good friend of Lord Beaverbrook and who also appeared picnicking in one of paintings persuaded him not to install the murals. Her argument being that as he was so cantankerous and quarrelsome, he was bound to, sooner or later, argue with one or more of the people depicted in the murals and then he would be forced to look at their depictions every time he dined. He listened to her advice and returned the panels to Adshead and paid the two-thirds rejection fee.

The panels were reassembled and exhibited at the large Peter Jones Department store in Central London in 1930 before being rolled up and relegated to a cupboard in the Adshead’s house where years later all but three were destroyed by fire.

In 1929 Mary Adshead married the painter Stephen Bone, the son of the artist and etcher Sir Muirhead Bone. Stephen and Mary had been students together at the Slade. The couple went on to have three children, two sons, Quentin and Sylvester and a daughter, Christina.  Mary and Stephen collaborated on a couple of children’s books, namely The Little Boy and His House in 1936, The Silly Snail and Other Stories in 1942 and The Little Boys and Their Boats in 1953 in which Mary provided the illustrations.

During their early married life, the couple made many painting and sketching tours during their travels through Europe.  Mary received many commissions through her architect father and also through the good auspices of her father-in-law who was always singing her praises in his circle of artist friends.  Her father-in-law, Muirhead Bone was well known for helping young aspiring artists such as Stanley Spencer, Gwen John and Cristopher Nevinson.

Mary Adshead’s first solo exhibition was held in 1930 at the Goupil Gallery and included the painting The Morning after the Flood which is now part of the Tate collection. This decorative painting by Mary Adshead was characteristic of the style taught at the Slade Art School when she was a student. The tutors at the Slade had students set out figurative compositions that had connections with Biblical tales. This work was set the day after the Great Flood when Noah’s boat with his family and animals had come to rest on dry land.  One art critic wrote that her figure painting combined a fashionable primitivism, loosely derived from Stanley Spencer with a fluency and humour rarely found among her contemporaries.

Her talent as a portrait artist can be seen in her 1931 self-portrait.

Other portraits she completed include one of Daphne Charlton, the painter who studied at the Slade and who was a close friend of Stanley Spencer. 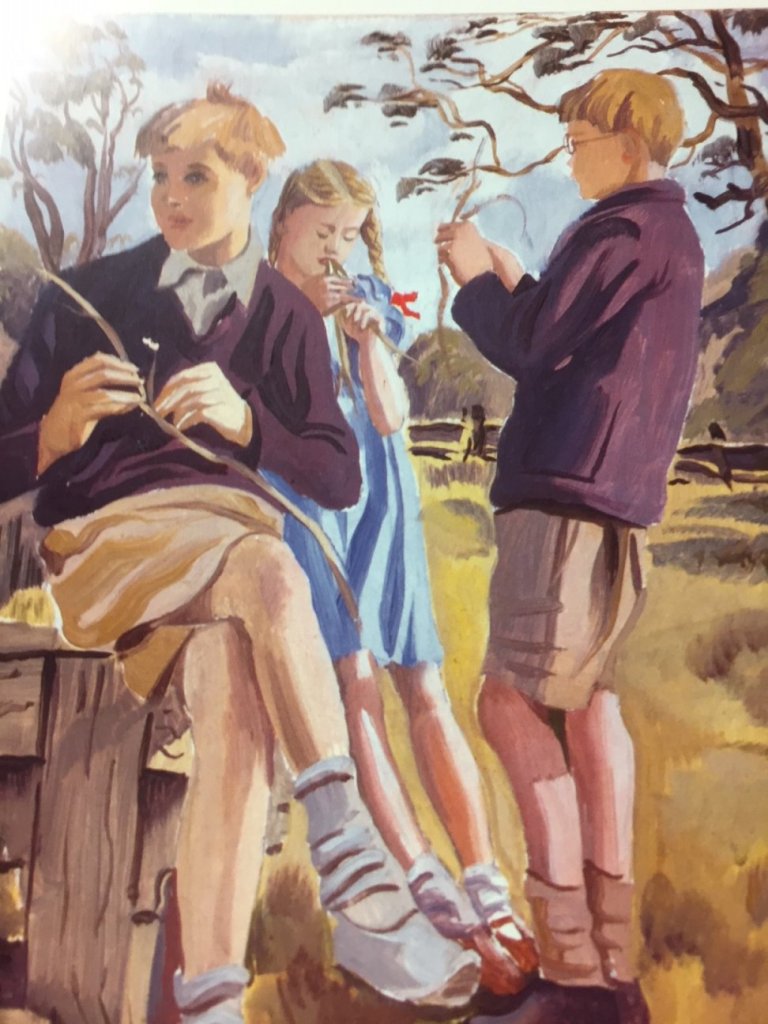 One of her favourites was one she did of her three children.

There is actually connection between Mary Adshead and her father and a place near where I live. The connection is the Victoria Pier Pavilion at Colwyn Bay, North Wales. The original pier was started in 1899 and was completed two years later. A 600-seat ‘Bijou’ theatre was built at the pier head in 1917 for the purposes of light entertainment. This original pavilion was completely destroyed by fire in 1922. This disaster forced the owners, the Victoria Pier Company, into bankruptcy and the pier was taken over by Colwyn Bay Urban District Council which arranged to re-build the structure. Eleven years later this second pavilion was destroyed by fire and a second blaze a few months later destroyed the theatre.

Not to be deterred by these two disasters, the Colwyn Bay Urban District Council set about rebuilding, and the third pavilion was opened on Tuesday 8 May 1934 at a cost of £16,000. Now to the connection !

The third pavilion was designed by architect Stanley Davenport Adshead, Mary’s father, and Mary and Eric Ravilious were commissioned to paint some Art Deco murals for the interior of the pier building. The pier was badly damaged by the gales and sea in 2017 and started to collapse and it was decided to dismantle the whole structure.

The Art Deco murals created by Eric Ravilious and Mary Adshead, back in 1934, from inside the pavilion, have all been successfully removed and are currently awaiting restoration.

Stephen Bone, Mary’s husband, was a landscape painter and for a while was very successful but later the market for his work dried up and he became depressed and began to look upon himself as a failure. Stephen Bone died of bowel and liver cancer on 15 September 1958 at St Bartholomew’s Hospital, London. He was just fifty-three years old.

After the death of her husband, and with her children all grown up, Mary embarked on a tour of America. During the adventure she carried her sketchbook and filled it with drawings of her journey. When she returned to England she published a book about her travels entitled Travelling with a Sketchbook.

Between 1948 and 1963 she submitted designs for a number of Post Office stamp issues including the Universal Postal Union stamps of 1949, the Festival of Britain stamp of 1951 and four denominations of the Wilding definitive stamps of 1952, which featured the Dorothy Wilding photographic portrait of Queen Elizabeth II .  Adshead’s design for the 8d, 9d, 10d and 11d were chosen.

In her latter years, lameness caused by painting off ladders hampered her work and life, but, ever purposeful, she would crawl where she could not walk with a stick, curious glances notwithstanding.  Despite this affliction Mary Adshead remained an active working artist until the end of her life.  She died in London on September 3rd 1995, aged 91.