Today I am concluding my look at the life of the Hereford artist Brian Hatton and featuring a couple more of his paintings.

In 1905 Brian Hatton was accepted into Trinity College Oxford where he remained for a year.  Hatton enjoyed travelling and in 1906 along with his uncle Charles Marr, he went to Holland where they visited Amsterdam and The Hague.  On returning from his trip abroad, Hatton went to Scotland where he enrolled at the Hospitalfields Art School in Arbroath and studied painting under George Harcourt, the Scottish portrait and figure painter.  This establishment is believed to be Scotland’s first school of fine art and the first art college in Britain.  It was founded by Patrick Allan-Fraser, a patron of the arts.   Allan-Fraser, who was the son of an Arbroath weaving merchant, had studied art in Edinburgh and was once president of the British Academy of Art in Rome.  He acquired the Hospitalfields estate through marriage and set about the remodelling of the buildings, converting the eighteenth-century barn into a gallery.  Allan-Fraser died in 1890 and having no heirs, bequeathed the building to the State for the promotion of Education in the Arts.   It was later renamed the Patrick Allan-Fraser School of Art.

In 1908 Hatton returned to England and went to live in Camden Place, London, where he and his cousin Geoffrey Vevers shared lodgings.  Whilst in London he attended an art school in South Kensington and spent time at the National Gallery copying paintings.  During 1908 Hatton was invited to join an archaeological expedition to Egypt, led by the English Egyptologist, Professor William Flinders Petrie and his wife. 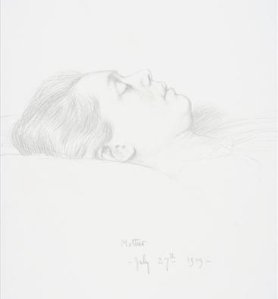 Brian and his party arrived back in England in May 1909.  Whilst he had been away his mother’s health had declined and she had been away from home staying with relations in Scotland.   In the July her doctors prescribed a rest cure and she went into a Shropshire nursing home in Church Stretton and for a time her health seemed to improve.  Sadly Brian’s mother’s health took a sudden turn for the worse and on July 27th 1909 she died.  This was a terrible blow to the Hatton family, especially to Brian.  His mother had, at an early age, recognised his artistic potential and nurtured it with great care.  There are numerous letters in the archives which show how his mother had been his closest confidant and friend.  His final tribute to his mother was a sketch he made of her as she lay at peace in her room, entitled Mother, July 27th 1909.

Following his mother’s death, and for the next twelve months, Brian immersed himself in his artistic work and carried out a number of portraiture commissions.  Eventually he craved a break from this type of work and decided to realise a dream he had been nurturing and planning for some time – a visit to Paris.  In November 1910 he decided to fulfil this dream and set off for the French capital, visiting the Louvre and working at the Parisian art school, Académie Julian.

It was whilst at this artistic school that he started the painting (above) entitled At the Académie Julian, Paris, which he completed back in England, two years later, in 1912.

After his brief sojourn in Paris, Brian returned to England and to his family home in Herford in time for Christmas. It was 1911 and the year that the new king, George V, was crowned king of England.  Brian made frequent trips to London and realised that to prosper artistically he needed to establish a studio in the capital and seek out a well-connected patron.  His dilemma was simple – to gain a wealthy London patron he needed to have a studio in the city but to be able to afford a London studio, he needed a wealthy patron !   In a letter to him from the English artist Briton Riviere,  who had been following Hatton’s progress from when he was a youngster, Riviere warned Hatton about the perils of London:

“…I feel that a move to London is almost inevitable for you as time went on and I hope that now you are strong enough in your own convictions and beliefs, to escape being drawn into any artistic extravagances and fashions of the day, which have been so much to the fore in these times…”

Despite the warning, Hatton left Hereford and with his Oxford University friend and fellow artist, Gerald Siordet set themselves up in The Bronze Door studio in South Kensington in January 1912.  Hatton received many commissions and soon he was so busy he found it difficult to spare time to return to Hereford and visit his father and siblings.  In 1913 he received a royal commission from Windsor Castle to make drawings of Princess Alice’s children, Prince Rupert and Princess May.   Princess Alice was the longest surviving grandchild of Queen Victoria.  The success of this commission led to many more from the “landed gentry”.

In 1913 he was approached by a member of the Royal Institute of Oil Painters to see if he would like his name to be put forward in the November annual election to become a member of the Society.  This was a great honour and to further his cause he submitted some of his best paintings to their summer exhibition, one of which was entitled The Outcast, which is My Daily Art Display’s featured painting today.  For this work he had employed a model, Beatrice Stewart, who despite her haunting beauty was lame.  In this work Hatton has depicted her with strong features and a somewhat curious expression.  It is an expression of resignation to her fate combined with a rebellious air and yet there is also a somewhat poignant sadness in her expression.  The work received a “highly commended” award at the exhibition.

In 1914 commissions for his work had virtually dried up and Brian was facing financial problems.  The newspapers at the time were full of stories of an impending war with Germany and on July 28th, just a fortnight before his twenty-seventh birthday, war was declared.  Brian left London and returned home and in September enlisted as a trooper with the 1/1 Worcestershire Yeomanry cavalry regiment.  In October the troop was getting ready to ship out to France.   On November 5th his father received a letter from him with some surprising news:

I have just got married to Biddy today by soldier’s licence.  I only decided to go through with it last night and got Biddy down to talk it over with her.  I suppose on the whole it is a very rash thing to have done…..”

He ended the letter rather sheepishly:

“…I hope when you have got over this little shock that you will give us your blessing.   We shall need all that we can get!   Yes, I know that I’m a silly young fool and all that.  But I am still your

Brian’s wife, Lydia Bidmead (Biddy), gave birth to their daughter, Mary Amelia,  on September 21st 1915, the same day as his father’s birthday.  Brian went home to Hereford to see his wife and daughter.  A month later he went to Devenport to embark the troop ship, Scotia, bound for Mudros on the Greek island of Lemnos, which had been a British base used for fighting in Gallipoli.     In his last letter to his grandmother he ended with a wistful remark, fully mindful of the dangers which lay ahead.  He wrote:

He and his regiment left Mudros and sailed for Egypt in December 1915.  Brian was now back in the country he had visited seven years earlier when he was part of the Flinders Petrie Archaeological Expedition.  On arrival he was trained as a signaller but found learning semaphore and the Morse code very difficult.  Mail to and from home was spasmodic and often letters went astray which he found very frustrating.  He had witnessed some military action but the imminent danger he and his colleagues were in seemed to have not fully hit home and there was even an element of enjoyment about the conflict.  In a postscript to his last letter home in April 1916 he commented:

“…To me, at the time, it all seems ridiculous – like a comic opera.  The men were all smoking and joking and nobody seemed in the least danger.  One only has to take reasonable precautions and lie down behind a few inches of sand hill to be quite safe from any bullet…”

On April 21st 1916 a party of combat engineers was sent to sink wells at Oghratina in the Sinai Desert and to protect them a detachment of Worcester Yeomanry from their base in Katia, of which Brian Hatton was one, was sent to protect them.  On Easter Sunday, April 23rd they came under heavy attack from a Turkish infantry regiment.  The British commanding officers asked for volunteers to ride back to their main garrison at Katia to fetch help.  Brian Hatton was one of the volunteers.  He rode off but was never seen again.   Months later his body was found.  The corpse was identified as that of Brian Hatton as in his wallet was a tiny photograph of Biddy and a postcard addressed to his wife.

I will bring this blog about Brian Hatton to a close with the words of Walter Shaw Sparrow, a British writer on art who wrote a book in 1926 entitled, Brian Hatton – a young painter of genius killed in the War and in it he talked about Hatton’s artistic ability:

“…Brian had the rarest of all things – true genius…”

He went on to describe Brian’s early years as:

“… a boy endowed with gifts of spirit so extraordinary that the first period of work from the age of ten, 1897, to that of nineteen, 1906, was a period not of rare promise only but also of wonderful achievement, showing not only maturity of Design, but maturity of Poetic Feeling, and a charm brimming with country life and English humour…”

The museum and art gallery in Hereford has a small permanent exhibition of Brian Hatton’s art work and I believe the drawings and paintings are often changed.  It is somewhat sad and disappointing that the display is so small and that there was no literature on hand about him considering he was the town’s famous son.   For a full and excellent account of his life through his letters you may like to get hold of Brian Hatton’s 1978 biography by Celia Davies entitled Brian Hatton – A biography of the artist (1887-1916).  I found the book of great help when I was piecing together Brian Hatton’s life.

One thought on “The Outcast by Brian Hatton”