In My Daily Art Display of July 28th 2012, I looked at the life and works of the German Expressionist painter, Gabriele Münter and in my next two blogs I want to showcase the life and feature a couple of the works of art of another early German Expressionist artist, Paula Modersohn-Becker.  She may not be familiar to some of you but I am sure you will find her life story interesting, if a little sad, and her artwork unusual. 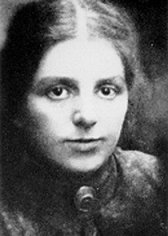 Paula Becker was born in Friedrichstadt, a central district of Dresden in 1876.  She was born into a cultural middle-class family, the third of seven children.  Her father, who was the son of a Russian university professor, had been a government railroad official but had had to take early retirement on health grounds and her mother was the daughter of an aristocratic family.  When Paula was twelve years of age she and her family moved to Bremen.  In 1892, when she was sixteen years of age, she travelled to London to stay with one of her father’s sisters.   During her seven month stay in England she received her first drawing lessons.  Paula loved drawing and painting and wanted to become an artist but her father, mindful of the poor financial rewards of being an artist, insisted that first she must enrol on and complete a two-year teachers’ training course before he would allow her to follow her dream of becoming a painter and study at the Berlin School of Women Artists.  She attended the teachers’ training college in 1893 and completed the course two years later.  During this two year period she received drawing and painting lessons from the German painter and stage designer, Bernhardt Wiegandt.

Just a few miles north of Paula’s Bremen home was the small village of Worpswede, which is situated in the Teufelsmoor, a region of bog and moorland.  It was to play a large part in Paula’s life as it had become the home of an artistic community.  It all began in 1884 when Mimi Stolte, the daughter of a shopkeeper in Worpswede, whilst staying with her aunt in Düsseldorf, met Fritz Mackensen, a young art student at the city’s Art Academy and since he was virtually penniless, she took pity on him and invited him to Worpswede to spend the holidays with her family.  After that, he visited her on a number of occasions and liked the area so much that, in 1889, he made it his home and soon, along with his artist friends, Otto Modersohn and Hans am Ende, founded the artists’ colony of Worpswede.  Other artists, writers and poets soon descended on the small town and in 1895 the “Kunsthalle Bremen” exhibited works by artists from Worpswede for the first time.

In 1896 Paula Becker enrolled on a painting and drawing course run by the Verein der Berliner Künstlerinnen (Union of Berlin Female Artists) which offered art studies to women.  Following this she began a one-and-a half-year apprenticeship.    At first she concentrated on drawing lessons with portrait and nude studies and later she studied painting under the tutorship of the Swedish/German painter, Jeanna Bauck.  The following year, Paula Becker visited the artist colony at Worpswede for the first time and met the German painter, Fritz Mackensen, who became her art tutor.  In 1898 Paula left home and went to live in Worpswede and worked alongside the other artists.  During this period she completed many works depicting women and children of the farming community and for models she would use the local peasant women and their children as well as getting some of the old women from the local poor house to pose for her. She also completed some landscape works, which depicted the desolate and dark moors which surrounded the Worpswede area.  These moors were crossed by a number of canals used by barges for transporting locally harvested peat moss to Bremen.  The artist colony painters of Worpswede believed in and promoted a romanticized view of country life, which they believed was a powerful antidote to the revulsion they felt for urban industrialization. Paula however thought differently and rejected the sentimental approach of her fellow artists, believing that a basically realistic subject could better represent profound spiritual values.  Although there was a kind of peace and tranquillity at Worpswede she still hankered after the excitement of city life.  So after more than twelve months at Worpswede she decided to head for the art capital of the world – Paris.   She left Germany on December 31st 1899, the last day of the nineteenth century.

My Daily Art Display featured painting today is entitled Old Peasant Woman Praying which Paula Becker completed in 1905.  There is a kind of Primitivism to this painting similar to what we have seen in Gaugin’s works.  The woman has her large lumpish peasant hands crossed over her chest in a meditative prayer-like manner.  There is a religious feel to this work.  One cannot say for sure what is in the background.  Could it be the coping of a wall with a large leafed tree in the background or is it just a flower/leaf-patterned wall.  However note how the artist has interrupted the background with brightness around the head of the peasant, almost halo-like, giving her a kind of spirituality.   She has a weather-beaten face from the continuous hours spent outside working in the unforgiving sunlight.   The painting is of a lower-class peasant woman and yet it is not a condescending painting.  There is a certain dignity about this woman.  This was never just a peasant painting which was meant to entertain the elite.  This is quite different to the way Van Gogh depicted his peasants in The Potato Eaters (See My Daily Art Display February 7th 2012).   Paula has given her subject a modicum of respect and by doing so has created a beautiful work of art.

In my next blog I will tell you more about Paula Becker’s life, her marriage to Otto Modersohn and her untimely death and feature some more of her works of art.

One thought on “Old Peasant Woman Praying by Paula Modersohn-Becker”