In my last blog I looked at the first meeting of Camille Doncieux and Monet.  It occurred in 1865 when Frédéric Bazille, a good friend of the twenty-five year old Monet, introduced him to Camille Doncieux who was still in her teens.  Camille, who was of humble origins, worked as an artist’s model.  Monet soon made her his number one model and shortly afterwards the two became lovers. The couple, because of the poor sales of Monet’s works of art, lived in depressing poverty.   Today I complete the story of Camille and Monet and look at a few more paintings the artist completed depicting Camille. 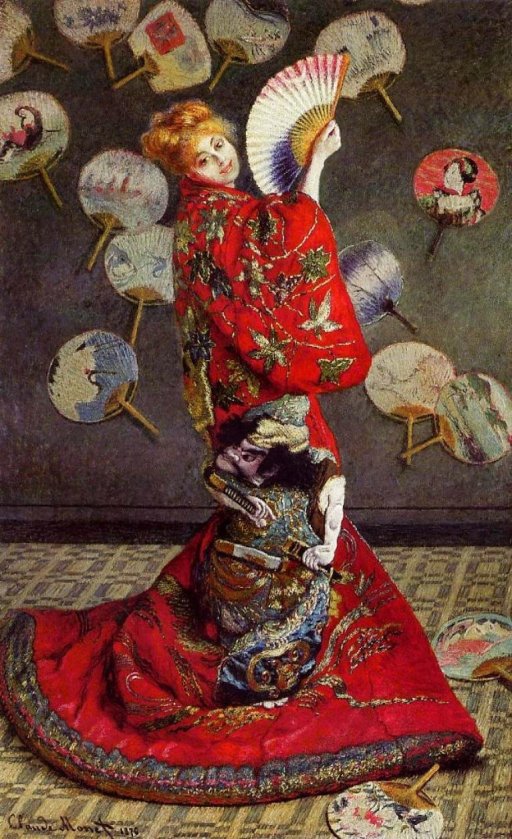 From the 1860’s till the end of that century, France was in love with all things Japanese.  This Japonisme as it was called had inspired both artists and the public.  Monet was not immune from this trend which swept his country.  Besides his art, he had two other hobbies.  He loved gardening and he loved to collect Japanese art, especially the Japanese woodblock prints.   In all he had built up a collection of over two hundred of these.  He had also accumulated a number of Japanese fans, kimonos and screens, some of which can still be seen at his house in Giverny.

The most palpable and undeniable proof of Monet being influenced by the art and culture of Japan is his oil on canvas painting, Madame Monet en Costume Japonais (La Japonaise), which he completed in 1875 and which currently hangs in the Boston Museum of Fine Arts. This work was in complete contrast to his earlier works.   Large-scale figure paintings had usually been looked upon as a major challenge for an artist.  Camille is depicted dressed in an elaborate kimono, holding a Japanese fan in her hand.   It is interesting to note that Camille is wearing a blond wig so as to emphasize her Western identity. Her kimono is sumptuously embroidered and the background is adorned with numerous Japanese fans. These accoutrements could, at the time, be bought for a few centimes in many of the Parisian shops and even the larger department stores had exclusive sections for all things Japanese.

In the painting Camille’s pose is of a conventional style and it is believed that Monet did this so as to enhance the chance of selling the work.   Because of this, there is a somewhat loss of spontaneity about it.  The scene looks very contrived.   However the brilliance of the colours he used is breathtaking.   Monet exhibited this work at the Second Impressionist Exhibition in 1876, where it attracted much attention.  Maybe Monet was saddened and felt somewhat guilty by the compromise he had made with this work solely to make it more attractive to potential buyers.  He later described it as “trash” and “a concession to the popular taste of its time”.

On June 28th 1870, Camille and Claude were married in a civil ceremony performed at the town hall of the eighth arrondissement of Paris. The French painter Gustave Courbet was one of the witnesses. Although Camille’s parents were present at the ceremony, Monet’s family were horrified by their son’s choice of partner and would not accept Camille Doncieux as their daughter in law, nor would they acknowledge their grandchild, Jean-Armand-Claude who had been born in August 1867.   Monet’s parents even tried to bribe their son into leaving his wife with the threat of their allowance to him being stopped if he continued the liaison.  However Monet chose his wife over money and refused to abandon Camille and Jean.   As a result, his allowance was cut off and his financial situation worsened and the three of them suffered extreme financial hardship, sometimes unable to afford food and often unable to afford paint.   He carried this burden for many years, and struggled greatly with poverty and the stress caused by Camille’s poor health, and his inability to pay for her medical care.   After the wedding and just before the start of the Franco-Prussian War the family travelled to London and Zaandam before returning to France and setting up home in Argenteuil, a town to the west of Paris.

In 1876, Camille Monet fell ill with what is believed to have been the beginnings of cervical cancer.   In Monet’s 1877 painting Camille Holding a Posy of Violets, which he completed that year, one can see the toll the disease has had on her health. Her face looks pale and haggard.  She looks tired and older. It was around this time that Monet received a commission from a patron Ernest Hoschedé and for a short time his finances took a turn for the better.  However in 1877 all this changed when Hoschedé went bankrupt and his art collection was auctioned off. This was a blow to the Impressionists, whom Hoschedé had supported,  and especially Monet.   The bankrupted Hoschedé and his family moved to a house in Vétheuil with Monet, Camille and Jean. However Ernest Hoschedé spent most of his time in Paris before fleeing to Belgium to avoid his creditors.   There soon followed speculation that Monet may have been carrying on an affair with Alice Hoschedé.    Some art historians have translated the look on Camille’s face in this painting as one of disgust with her husband and his liaison with Alice Hoschedé.  This was the last painting Monet did of Camille whilst she was alive.

On March 17th 1878, Camille gave birth to her second son, Michel.  The birth of Michel further weakened Camille.   Over the next twelve months Camille’s health deteriorated and on August 31 1879, a priest was called to the house to administer the last rites and to sanction her marriage to Monet, although they had been married in a civil ceremony nine years earlier.   Camille’s death on September 5th 1879 devastated Monet. She was just thirty-two years of age.   Monet painted a picture of his wife on her death bed and the work can be seen at the Musée d’Orsay.  Monet remembered the time well writing to a friend telling him of his urge to paint that last portrait of Camille:

“…I caught myself watching her tragic forehead, almost mechanically observing the sequence of changing colours that death was imposing on her rigid face. Blue, yellow, grey and so on… my reflexes compelled me to take unconscious action in spite of myself…”

Monet included lots of blue and gray in this painting, as well as yellow,orange and red and in some people’s opinion the use of these colours made the painting too light. Light, coming from the right hand side, shines on the face of his deceased wife.   We do not get a very clear view of Camille although we can just make out her face and that she is wearing a shroud.

After Camille Monet’s death in 1879, Monet and Alice along with the children from the two respective families continued living together at Poissy and later Giverny. Ernest Hoschedé died in 1891, and, in 1892, Alice and Claude Monet were married.   Little is known about Camille Doncieux Monet mainly because Monet’s alleged mistress and second wife, Alice Hoschedé, was so jealous of Camille that she demanded that all photographs, mementos and letters between Monet and Camille were destroyed.  She was determined that Camille’s very existence was denied.

Why did she hate Camille so much?    Maybe she realised that Camille Doncieux was the one and only true love of Claude Monet.

If you would like to read a fictional account of the relationship between Camille Doncieux and Claude Monet then I suggest you read:

Claude and Camille: A novel on Monet by Stephanie Cowell