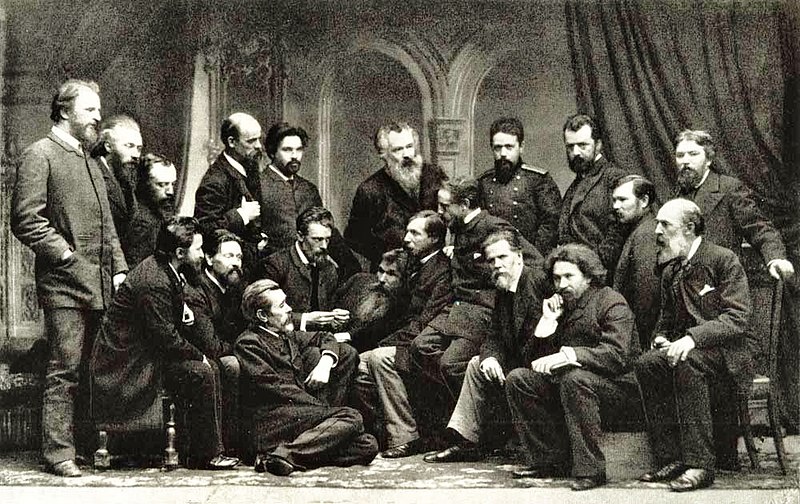 Nickolai Bogdanov-Belsky has often been referred to as a “wanderer” (peredvizhnik), because he joined the Society for Itinerant Art Exhibitions (the Peredvizhniki) in 1895.  The Peredvizhniki came about when in 1863 fourteen students at the Russian Imperial Academy of Arts refused to participate in the annual gold medal competition because they felt the required subject, “The Entry of Odin into Valhalla,” and the Academy’s continued insistence on the supremacy of history painting was completely irrelevant to contemporary Russian life. They rejected the Academy and its rules and this had dire consequences for them as it meant they had also rejected the major patron in Russia, which was the Tsarist government. This resulted in a number of the artists being forced to organise their own exhibitions, when they could gain permission, so that they stood any chance of earning money which was needed if they wanted to continue with their artistic careers. 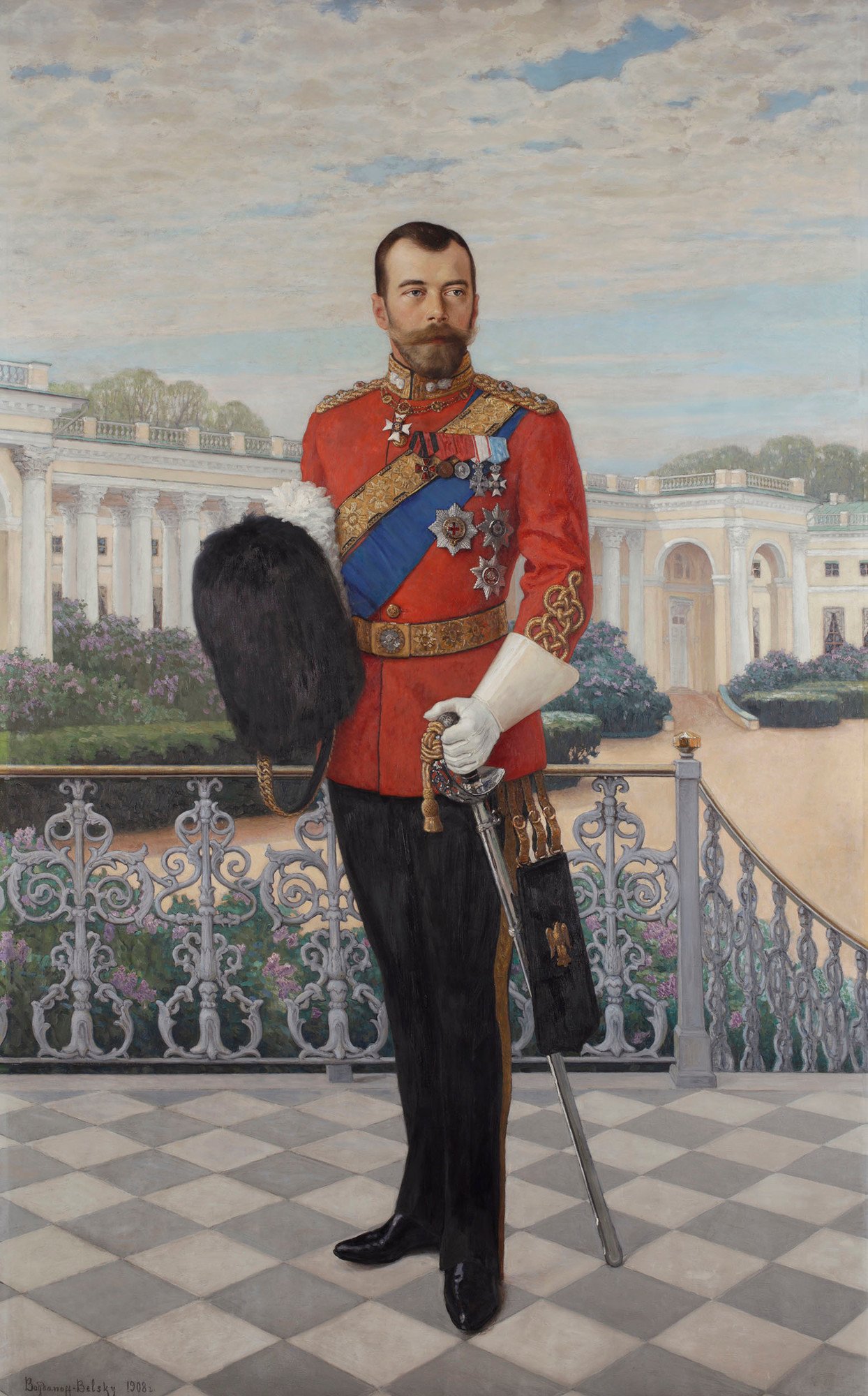 Having graduated from the Academy of Arts in 1903, Nickolai was awarded the official title of Academician of Painting. Nikolai Bogdanov-Belsky’s fame as a painter of portraits had spread so far that Emperor Nicholas II ordered him to paint his portrait in 1904. Nickolai and the emperor met in 1906, and the portrait was completed in 1908.  The emperor was delighted with the portrait and went on to buy two further works by Nickolai, Reading in a Rural School and The Game of Checkers. 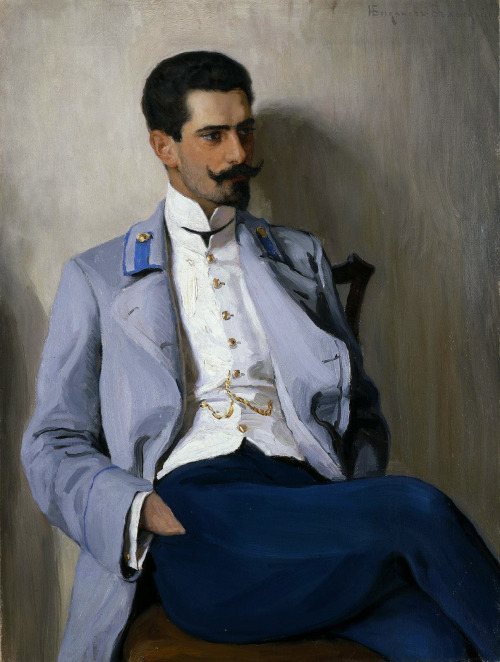 Nickolai Bogdanov-Belsky completed many more portraits of people who were close to the Royal family such as that of the Prince Alexander Konstantinovich Gorchakov, who married Daria Mikhailovna Bibikova, a lady-in-waiting to Empress Alexandra Feodorovna.

In 1914, Bogdanov-Belsky became a full member of the Academy of Arts and he was elected Chairman of the Arkhip Kuindzhi Society, a society founded by Arkhip Ivanovich Kuindzhi a Ukrainian landscape painter of Greek descent, who was once professor-head of landscape workshop at the St Petersburg Academy.  Bogdanov-Belsky held the position as chairman until 1918.  For Nickolai everything changed in 1917 with the collapse of the monarchy and the revolutionary turmoil.  He found it impossible to recover from this shock of what was going on all around him and found it impossible to adapt to a new way of life.  Salvation came in the form of an invitation from his friend, the Russian Impressionist painter, Sergei Vinogradov who had relocated to Latvia and invited Nickolai to join him.

In the Autumn of 1921 Nickolai relocated to Latgale, the easternmost region of Latvia. He continued to paint depictions of familiar subject matters that he loved so much: rural nature and peasant children.

Nickolai often spoke about his love of Latgale and Latvia:

“…Latvia generally is very picturesque, and especially Latgale. Its nature reminds me very much of the Northern part of Smolensk province, where I was born and spent my childhood…”

For the next twenty years, his artwork appeared in many exhibitions in galleries at Tallinn, Oslo, Munich, Toronto, Helsinki, Berlin, Hamburg, Prague, Copenhagen, and Belgrade. He and his art were in great demand and in 1936 for his significant contribution to the culture of Latvia he was awarded the highest award of Latvia – the Order of Three Stars.

Nickolai Bogdanov-Belsky followed in the footsteps of the great Russian landscape painters and through his landscape work has managed to emphasise the interest in national nature, the depiction of his native land. His landscape depictions are all about light and air, and the atmosphere of this canvas mesmerises the viewer with its brightness, spontaneity, tranquillity and life-affirming motif.  A prime example of this is his 1930 landscape painting entitled Forest.  Nickolai was a great exponent of the plein air technique, which allowed him to catch the most fleeting and subtle fluctuations of light, its changeability and liveliness.  In this painting Nickolai has used a sunny and bright palette.  The sunlight plays on the tree leaves in the fore and mid-ground whilst the spruce forest in the background, which we see is in the shade, and this affords us the feeling of a fresh coolness which would have been so looked-for on a hot summer day.  Meandering and rutted rural paths create interesting subtleties in the vertical composition, that the artist had chosen. The blues of the skyline with white clouds that Nickolai has used contrasts strikingly with a various shades of green used in the body of the work.  It is a typical work of art by Nickolai Bogdanov-Belsky.  It is a work of life, of simplicity,  tranquillity, and acute observation. He had always been commended for his landscape paintings.  His very first one, Spruce Forest which he completed when he was starting out at the Academy was hailed by one of his tutors, the Russian painter Vasily Polenov:

“…Your painting captivates me by the simplicity and inner beauty of the landscape. Your forest lives and breathes – this is the main thing…”

Another glorious landscape work by Nickolai Bogdanov-Belsky was his landscape work entitled Forest Lake which he completed in 1938. Look at how he has depicted reflections on the still water of the lake.

His 1925 work, Boy in a Forest, combines his two favourite motifs, peasant children and landscapes.

The last lifetime exhibition, which was showing Bogdanov-Belsky’s work took place in 1941 in Moscow.  In 1944, Bogdanov-Belsky became seriously ill, and had to leave Latvia to seek medical attention.  Despite the war, he and his wife Antonina Maximilianovna Erhard, a Baltic German, travelled to Germany to be operated on in a Berlin clinic. Nikolai Bogdanov-Belsky died in Berlin on February 19, 1945, during the bombing of the city and was buried in the Russian Orthodox cemetery at Berlin-Tegel.  Many of his paintings and archive documents remain in Germany and this legacy is looked after by the artist’s descendants.

I will leave you with two quotes of Bogdanov-Belsky which reveal his love for his art:

“…Art gives people the joy and happiness to recognize beauty...”

“…Children have always fascinated me, I have dedicated my life to them and still do …the world of a child is truly good!…”