Dora featured in many of her husband’s paintings.  One such is his 1963 work entitled Interlude.  In a way it is a narrative painting recounted a day of painting for the artist.  Here we glimpse artist John Koch in his apartment studio with an African American model, said to be one of is favourites.  She dominates the foreground of the painting.  The contrast between the colour of her dark ebony skin, the white bed sheets, and the vibrant red robe of the third person in the painting make for a great contrast.  The shape of her graceful back echoes the lines of the nearby Queen Anne style chair.  The African American model, Rosetta Howard, dominates the foreground as Koch depicts her dark velvety back against the white bed sheet and the vibrant red robe of the third person in the painting, John Koch’s wife, Dora, who offers the model a cup of tea. The three figures neither engage with the viewer, nor do they engage in eye contact with each other.  The artist fixates on his partially completed canvas.  The artist’s wife in the red gown avoids looking at the naked body of the model, who in turn concentrates her gaze on the cup and saucer.  So, like other paintings by Koch, the figures and furniture have been set by the artist.  What are we to make of the depiction?  Is it just a simple portrayal of an artist and the model taking a break from their work or is it something more?  Could it be John Koch wanting to highlight a contentious role reversal – a white woman in 1963 serving a black woman !

Dora Koch appeared in the same red dress in her husband’s 1970 painting entitled The Breakfast Tray.  For John and Dora, breakfast on a tray was a daily ritual.  In this work we see the tray laden with their finest china.  The setting for the painting is the hallway of their Setauket, Long Island house.  John holds the tray in front of himself and it appears to be an offering to his elegantly robed wife who is mounting the stairs.

Rosetta Howard appeared in a number of John Koch’s paintings including His work, Studio – End of the Day in which artist and model finally take a rest from painting and posing.

Another painting to feature his wife was John Koch’s 1970 work entitled The Lesson in which we see Dora giving one of her piano lessons.

John Koch was known for his sophisticated and stylish depictions of trendy life in and around New York City. His 1965 painting, Summer Night, is a perfect example of the genre.  It was painted on a monumental scale (198 x 112 cms) and highlights Koch’s dextrous skill for assembling figures so as to highlight the interactions and intrigue between his subjects. The scene in this painting is set in the evening on a front porch of a wealthy home with people relaxing after drinks and a meal.  The scene exudes a laid-back and tranquil elegance of a family gathering on a warm evening.  Note how Koch has carefully arranged the props which translate into fastidiously arranged still life elements of the work.  The painting was first exhibited at the Kraushaar Galleries. His time working with the gallery brought him great commercial success for the remainder of his career.  The painting was last sold in 2020 at Bonhams, New York Auction for US$ 162,575

There were a number of paintings by Koch that depicted both artist and sitter and one of my favourites is his painting entitled The Sculptor.  It is a quasi-self portrait with John Koch as the sculptor, surrounded by the tools of his craft, including a caliper, which he is holding – in fact, one should remember that John Koch was not only a painter but a sculptor.  The model in this work was Ernest Ulmer, one of Dora’s former student who was also the subject of Interior of Studio. Ulmer is painted in full view from the back, his muscular body extended in a classic pose.  The sculpture painted in the background was one that he had made. It is a scene from Greek mythology, with Hercules and Prometheus, a mythological individual who stole fire from the gods to bring it to humans. Koch has added a touch of humour to the depiction with the visual pun between that tale from Greek mythology and the depiction in the painting of the model handing a light to the sculptor for his cigarette.  In the painting we see Koch leaning forward with the cigarette in his mouth, and the flame from the lighter held by the model is cleverly reflected in his glasses, as if extending the spark to the man himself.

In 1967 John Koch completed one of his most important paintings.  It was entitled The Plasterers.   The two men have come to Koch’s apartment to make good repairs to the walls.  In the background there is a bank of windows, some of which are open.   Look through the windows and you can see that Koch has managed to depict a panoramic skyline, probably a view of the Hudson River from his apartment window at the El Dorado building at 300 Central Park West of the Hudson River.  In the left foreground there is once again depicted Koch’s sculpture, Prometheus, which we saw in his painting, The Sculptor.   Through the windows streams the daylight which dances on the highly polished floor and furniture.

For some reason, it is this shiny wooden floor which always reminds me of Gustave Caillebotte’s 1875 painting The Floor Scrapers which depicts three workers scraping a wooden floor in a bourgeois apartment.   On May 9, 2009 at the Brunk Auctions in Asheville, North Carolina, the painting, along with six preparatory sketches for the painting, sold for $210,000.  The painting was shown at two major Koch exhibitions. The first in 1973 at the New York Cultural Centre. The second was in 2001-2002 at the New York Historical Society.   The New York Historical Society’s 2001 exhibition catalogue described the painting as:

Another painting featuring two workers in the setting of John and Dora’s apartment is the 1975 work entitled The Window Washers.

Another unusual work by Koch was his 1968 painting entitled The Accident. No.2.  It is a narrative work.  In the depiction we are looking into the small artist’s studio, which could also act as the artist’s bedroom.  The props set up by John Koch are a small single-bed with ruffled sheets, a discarded red silk robe, a pair of bedroom slippers which have been casually abandoned, a hand-mirror propped on the rim of a waste.  The window is partially covered by a curtain pulled back and of course the artist’s workstation with his easel, canvas, and palette. The artist and his naked model have rushed to the window to view what is happening outside.  By the title of the painting the artist is telling us that they are looking out at an accident which has happened in the street below.  The model is pointing down to something in the road below which he is straining to see.  It is an unusual scenario as most depictions of artist and model focus on the single-minded concentration of the artist as he studies his absolutely motionless model.  Here the commotion outside has broken the spell of their sensual assignation.

In his 1964 painting, Night, John Koch has presented us with the contrast of warmth and coolness.  The coolness of the bodies now divested of clothes and yet the oppressive heat and humidity of a New York summer night when one tries desperately to be able to sleep.  John liked the setting of his painting describing it:

“…a picture of a young couple before they go to bed at night, which I think is as splendid an idea for a picture as any could be…”

The woman has fallen asleep whilst the man bides his time by reading a newspaper.  Besides him the light from a lamp on the bedside table glows through his newspaper.  The bottom of the bed and the white sheets have been illuminated by the soft blue glow of a television which is on a stand at the end of their bed.

John Koch whose oeuvre contained a large number of nude depictions of couples or a single male or a single female.  He was adamant that the depictions were not envisioned to be erotic, even when they depicted couples in bed. If you look over the depictions featuring a male and a female in bed they are not in the middle of lovemaking but simply relaxing, even though it may be in a post-coital state.  The pair who could be lovers or married couples show neither indication of sexual stimulation, lustful craving nor agitated signs of conflict.  There is a kind of neutrality with regards the couple’s personal thoughts.  Koch’s agenda seemed to be one that was to offer viewers a normal heterosexual relationship – one of idyllic well-being, a sense of happiness unsullied by lust or anguish. In his 1973 painting, The Bath, we see a man drying himself on the edge of a tub. He takes time to glance back at the woman who remains in the water. In contrast to his rough and hirsute muscular and bronzed body hers is smooth, pale, and supple. 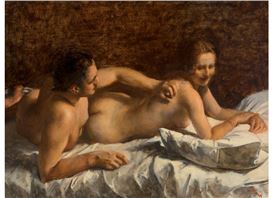 Back Scratcher by John Koch

John Koch became an elected member of the American Academy and the National Institute of Arts and Letters in 1970. Five years later, he suffered a stroke and abandoned painting for the first time since his youth. John Koch died on April 18th 1978 from complications of another stroke.  He was 78.  His wife Dora died on September 9th 1987 aged 83.  John Koch’s art was dismissed by the more progressive art scene as just a society painter and was little known outside his circle of wealthy, connected patrons. However, he managed to capture scenes of a New York society that is mostly gone now and therefore many of his paintings were a historical record of a world which was more formal and refined.  His often stage-managed art is classed as being of a realism genre and yet the depictions of opulence were tinged by an element of fantasy.  Maybe it is a fantasy we all hold dear.