The artist I am looking at today, born Lilla Cabot, comes from a long line of powerful and wealthy descendants.  The Cabot family was part of the Boston Brahmin, also known as the “first families of Boston.  It all goes back to John Cabot, who was born on the Isle of Jersey on April 7th 1680.  At the age of twenty he set sail for America and settled in Salem, Massachusetts in 1700.  John was not part of the first community to have arrived in the New World but by the end of the eighteenth century, the Cabots were the pre-eminent family of New England.  By 1800 John and his son Joseph Cabot were extremely wealthy, largely because of their privateering during the American Revolution, smuggling, and trading in slaves and opium.  Shipping during the eighteenth century was the lifeblood of most of Boston’s first families.  In the nineteenth century, the Cabot enterprises multiplied and took in oil and gas production, railroads, and chemicals.  The Cabots maintained their wealth and social status into the twentieth century, in the main, by educating most of their sons at Harvard and carefully arranging their marriages and the marriages of their daughters.

Lilla Cabot was born in Boston, Massachusetts on January 13th, 1848.  She was the eldest of eight children of Doctor Samuel Cabot III and her mother, Hannah Lowell Jackson.  She had six brothers and one sister.  Her family was one of the most important in Boston society, and the family were on friendly terms with such literary luminaries as Louisa May Alcott, and Ralph Waldo Emerson. 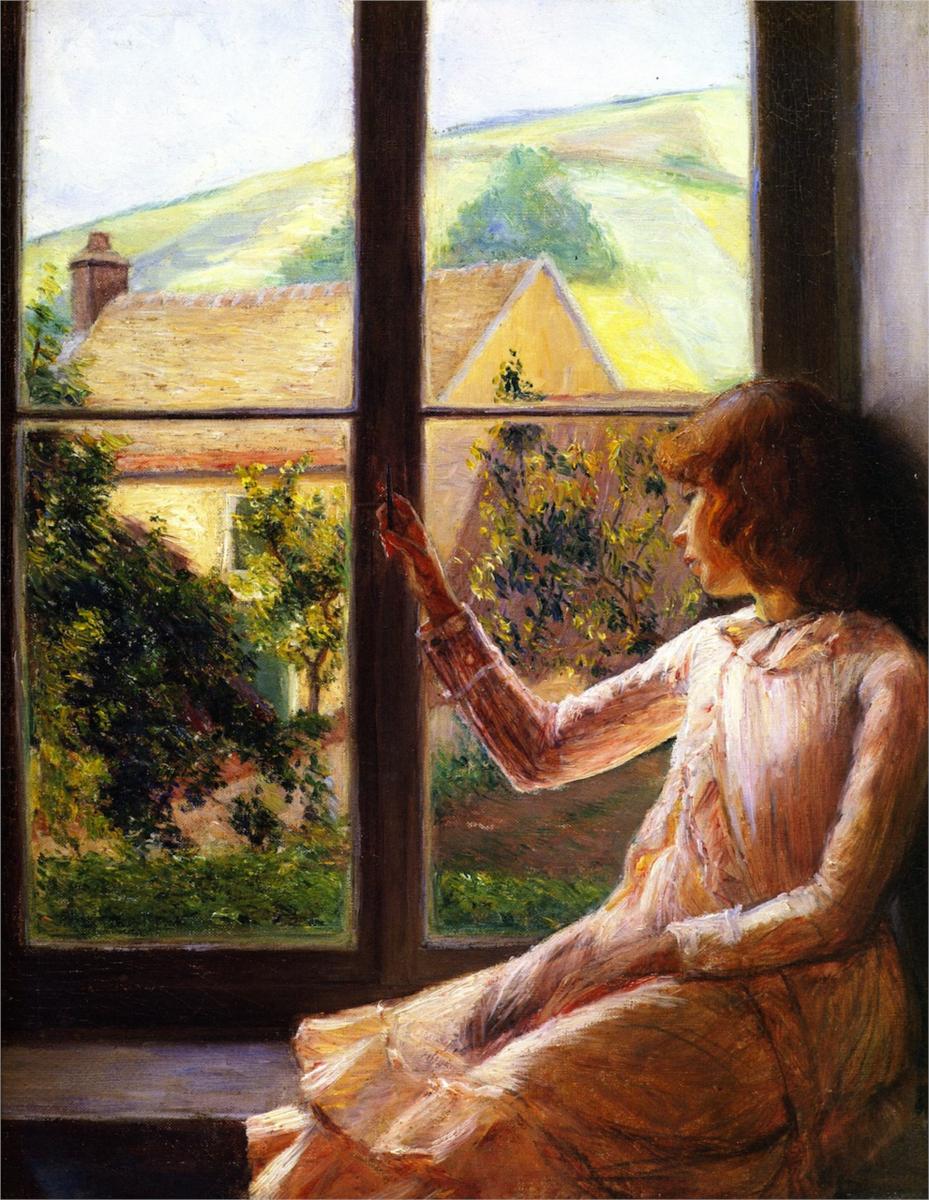 Lilla had a good and fulfilling childhood and was given the freedom to think for herself by her parents.  She was an avid reader and liked taking part in outdoor sports.  During her school years she studied literature, language, poetry, and music but during her early teenage years there she had no great interest in painting and drawing except that occasionally she would take part in sketching sessions with her friends.  As a child and teenager she never received any formal art training, This would not happen until she was thirty-six years of age !

The Cabots played an active role in Boston society and through that young Lila came into contact with many people who would congregate at the Cabot residence.  On April 12th, 1861, when Lila was just thirteen years old, the American Civil War began.  Her parents, coming from the North, were passionate abolitionists and they took a hands-on role in the war effort by offering care to wounded soldiers and helping to safeguard runaway slaves.  Lilla Cabot was seventeen when the Civil War finally ended and it was around this time that her father moved his family out of the city and relocated them to farmstead in Canton, Massachusetts, a small rural town about 15 miles southwest of downtown Boston.  It was probably here that Lilla Cabot became interested in landscapes and rural life.

Thomas Sergeant Perry was an American editor, academic, literary critic, literary translator, and literary historian. From his early childhood days, he was a close friend and associate of Henry James who would become one of Americas greatest novelists.   Perry was a member of the faculty at Harvard University and after graduating in 1866, went to study in Germany.  He returned to America and in 1872 worked for the literary magazine, North American Review. He was the grandnephew of U.S. Navy Commodore Matthew Perry and a Harvard professor who was once described as ‘the best-read man in Boston’.  He and Lilla Cabot became friends and the relationship turned into love and on April 9th, 1874, twenty-six-year-old Lilla Cabot married twenty-nine-year-old Thomas Sergeant Perry.   The couple went on to have three daughters, Margaret born in 1876, Edith in 1880, and Alice in 1884.

The answer to why Lilla became interested in art is thought to be due to the encouragement to take up painting by her husband’s brother in-law John LaFarge, an artist famous for his stained-glass windows, and the husband of Thomas Sergeant Perry’s sister Margaret.  One of Lilla’s first works was that of her infant daughter Margaret.

In the same year that Lilla’s youngest daughter was born she enrolled on her first artistic course.  She began with private lessons in 1885, with the portrait painter Alfred Quentin Collins and one of the first works she completed under the tutelage of Collins was the 1885 work entitled The Beginner which depicts her ten-year-old daughter Margaret playing the violin.

Looking at this portrait of her daughter playing the violin, it can be seen the input Collins must have had on Lilla as seen in Collins’ Portrait of Alexander Stewart Wetherill.  The depiction has the same dark background and the sitter has the same serious facial expression.

In 1885, Lilla’s father died and left her an inheritance and this financial backing gave her the chance to enrol at art institutions which would afford her the chance to study art more earnestly. In January 1886, she began to study with Robert Vonnoh, an American Impressionist painter known for his portraits and landscapes.  At the time, Vonnoh taught at both the Cowles Art School in Boston and at the School of the Museum of Fine Arts, Boston.  Lilla was inspired with Vonnoh’s more unorthodox work which was very different to that of Alfred Collins and it was to be the beginning of her artistic journey and lifelong commitment to Impressionism.  Another tutor she worked under at Cowles School was Dennis Miller Bunker, a leading American Impressionist, who was the Cowles School chief instructor of figure and cast drawing, artistic anatomy, and composition. 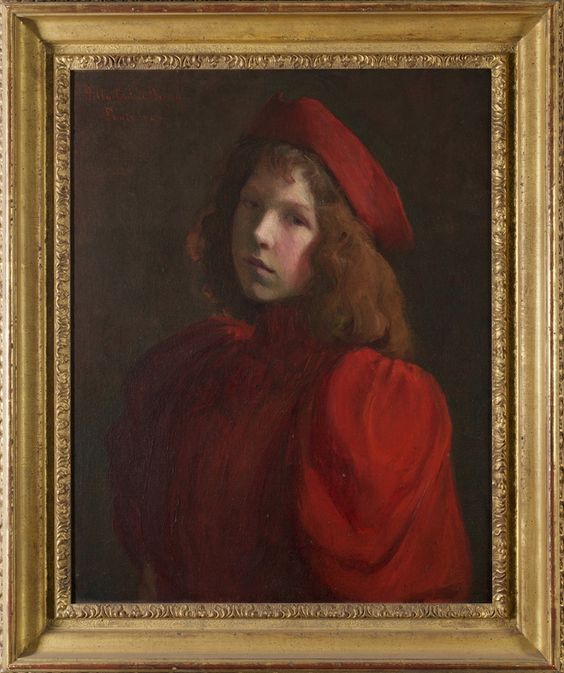 The Red Hat,” or “Edith,” by Lilla Cabot Perry

In 1887 Lilla Cabot Perry received a commission to paint the portraits of the three daughters of Aaron Lufkin Dennison, one of the founders of the Waltham Watch Company.  It was a valuable assignment and covered the cost of first-class sea voyage to Europe in June 1887 for her and her husband.  Upon arriving in France, Perry enrolled in the Académie Colarossi where she worked with Gustave Courtois and Joseph Blanc. She also studied with Felix Borchardt, a German painter. In addition to receiving formal academic training, Perry spent much of her time studying the old masters at the Louvre in Paris.  She also travelled to Madrid and spent time copying works at the Museo del Prado. Her 1888 painting The Red Hat, is testament to her previous formal training she had received back in America as well as the time she spent in Europe studying the works of the old Masters, especially the work of Sandro Botticelli. 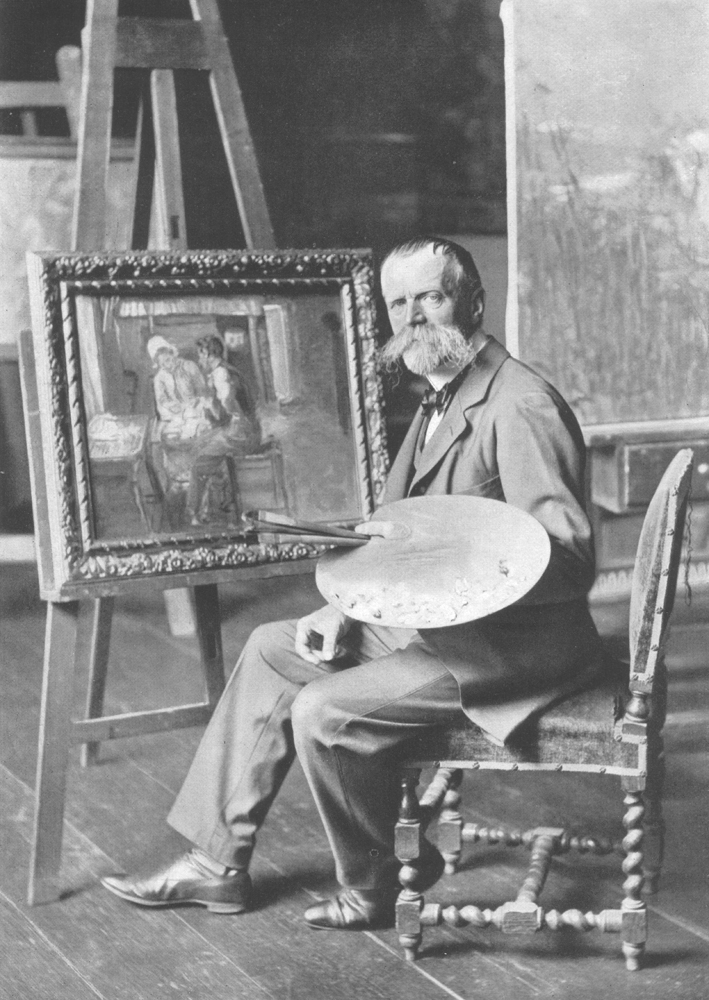 Fritz von Udhe in his studio

In 1888 Perry travelled to Munich where she studied with the German painter Fritz von Uhde, who mainly worked with genre painting and religious motifs .  Over the years, his colour palette became stronger and more colourful, similar to those of his impressionist artist colleagues.  His painting style could be described as being between Realism and Impressionism, and he was once known as “Germany’s outstanding impressionist” Fritz von Udhe became one of the first painters to introduce plein-air painting in Germany.

Lilla Cabot Perry left Germany in the Autumn of 1888 and returned to Paris where she enrolled in art classes at Académie Julian under the tutelage of Tony Robert-Fleury, a French painter, known primarily for historical scenes.

One of Lilla’s fellow artist friends was Walter Gay, the Massachusetts born painter who was residing in Paris.  Many young American artists who arrived in Paris in the late 19th-century became Gay’s pupils so much so that the New York Times labelled him the “Dean of American Artists in Paris”.  At the start of his career he would often depict realist scenes of French peasantry but later in life he began to depict stylish interiors with exquisite furnishings.  It was Walter Gay, in 1889, who persuaded Lilla to put forward two of her paintings for inclusion at an exhibition held by the Société des Artistes Indépendants.

The paintings were portraits of her husband, Thomas Sergeant Perry, (seen earlier on) and one of her middle child, nine year old daughter, Edith, also known as The Red Tunic.  They were accepted into the exhibition and that success marked the start of Lilla Cabot Perry’s artistic career.

The success of her paintings also enhanced her reputation as an artist, so much so that she was admitted as a student at one of Belgium artist’s Alfred Stevens’ class in Paris.  Stevens like Walter Gay depicted opulent French interiors but in his case he added genteel ladies to his depictions.