In 1914, before Maxfield Parrish had  completed the Florentine Fête murals, the Curtis Publishing company, through Edward Bok, decided to commission a monumental-sized mural at 15ft x 49ft (4.6 m × 14.9 m) which would be placed in the building lobby. For some unknown reason Bok decided not to give the commission to Parrish.  Maybe it was because Parrish was still working on Bok’s previous 18-painting commission or maybe Bok was disappointed with Parrish at the length of time he was taking to complete that project.  Whatever reason, Bok made the fateful decision to approach other muralists, but fate stepped in to thwart him.

Bok first went to London and met the American muralist, illustrator, and painter Edwin A. Abbey, who had based himself in London since 1883.  Abbey was working on a project for the capitol building in Harrisburg, but Bok persuaded him to agree to the commission and was given free rein to paint anything he liked for the proposed Curtis Centre mural.  Bok returned to America elated with the deal he had made with Abbey.  However, the day after Abbey started work on the mural, he collapsed and died.  Bok still preferring not to approach Parrish, tried to contact Howard Pyle who was making a name for himself as an educator and muralist. Pyle had been living in Italy with his family for a year.  Bok had never met Pyle and on finally contacting Pyle’s home by telephone he was informed that fifty-eight-year-old Pyle had just died in Florence of a kidney infection.  Still undeterred and disregarding fate, Bok approached a third artist, Louis Boutet de Monvel, a famous decorative master, and he agreed to carry out the project, Monvel was invited to Philadelphia to inspect the space at the Curtis building and discuss the project but almost immediately after arrangements were made, Monvel died in Paris. 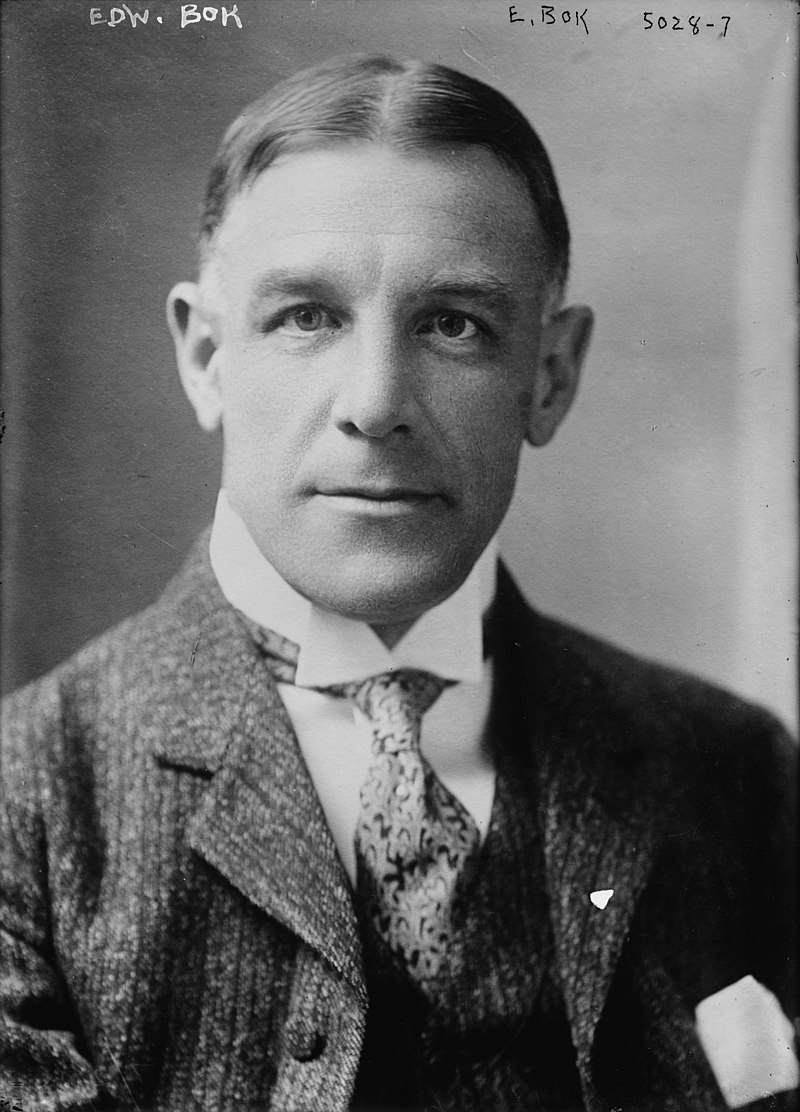 Edward Bok was now feeling that his mural project was cursed.  Finally, he put the commission out to tender and received back six submissions, all of which were rejected by a panel of judges.  Bok’s final throw of the dice was his approach to Louis Comfort Tiffany, an American artist and designer who worked in the decorative arts and is best known for his work in stained glass, and who had once designed a glass mosaic curtain for the Mexico City’s Municipal Theatre. Bok had seen the work and remembered the look of favrile glass, the name given to a type of iridescent art glass which had been developed and patented by the artist.   Bok finally contacted Parrish and asked him to come up with a sketch for Tiffany to use, despite the fact that Parrish had never worked with glass or mosaics. Parrish’s preliminary drawing was approved.

The collaborative project took six months of planning and thirty skilled workers were employed.  Over one million pieces of glass were used to create the Dream Garden mural and the finished work was given a New York exhibition where it was viewed by over seven thousand people. People were thrilled with the finished work.  It took six months for the mural to be disassembled in New York and then reassembled in Philadelphia.  The mural which was now in the lobby of the Curtis Company building was admired by thousands and became a Philadelphia art treasure.  All was well until July 1998 when it was announced that it was about to be removed and sold to an anonymous buyer by the Estate of developer and arts patron Jack Merriam. It was later discovered that the mystery buyer was the casino owner Steve Wynn, who planned to move it to Las Vegas.  The beneficiaries of the estate were four non-profit education and arts institutions and Merriam’s widow, who died before the disposition of The Dream Garden was settled.  Following a vociferous public outcry, the buyer decided not to pursue the purchase. To provide greater protection for the mural in the future, the Philadelphia Historical Commission designated the mural as the City’s first “historic object,” under an existing provision of the historic preservation ordinance. The Merriam estate appealed this designation and followed up by filing for a demolition permit.  Appeals and counter-appeals followed for the next three years.  Finally, in 2001, came a sweeping gesture of civic rescue, when the Pew Charitable Trusts agreed to provide $3,5 million to buy out the interest of the owner’s heirs, and the three remaining beneficiaries and turned the mural over to the Pennsylvania Academy of the Fine Arts with the understanding that it will remain in the lobby of the Curtis Building.

The sweet manufacturer, Ohio-born, Clarence A. Crane, commissioned Maxfield Parrish to create decorative labels for the Crane’s Chocolates Christmas gift boxes from 1916 to 1918.  For the 1916 Christmas gift box of chocolates Parrish submitted the art print entitled Rubáiyát which was adapted from the poem by Omar Khayyam.

For the 1917 Christmas gift box, Mr. Crane suggested to Parrish that he should make Cleopatra the subject for the painting as he and the public had been delighted with Parrish’s depiction of The Rubáiyát of Omar Khayyám that he painted for the previous year’s edition of the gift box. Parrish was pleased to go along with the suggestion and in a letter, he wrote to Mr. Crane:

“…Cleopatra is welcome here, or any lady of history of undoubted charm…Of course there are no end of subjects. All I care about is something that can hold color and be made effective…”

Now all Parrish had to do was decide on a young model to pose as Cleopatra.  Parrish asked his best friend, neighbour, and confidante, the American writer Winston Churchill if his wife, Mabel Harlakenden Churchill, would pose as Cleopatra. Parrish’s wife, Lydia, made the request and Mabel agreed to model for the painting. The painting was well received and according to Coy Ludwig’s 1973 book, Maxfield Parrish, it received an enthusiastic reception:

“…Cleopatra arrived in Cleveland on April 16, 1917, to an enthusiastic reception. The unusual design, with subjects in costumes reminiscent of silent-film exotica, combined several bare-chested oarsmen, a female attendant, and Cleopatra in a loose robe reclining on a bed of roses in a frame of frozen moonlight. The lapis lazuli blue water and the typical Parrish blue starlit sky were separated at the horizon by white mountains. Polka-dotted and checkered fabrics, used as the lap robes of the oarsmen and the headdress of the standing figure, were a favourite motif of the artist…”

The third Crane’s Christmas gift box of chocolates, produced in 1918, was adorned by Parrish’s print of an oil on panel painting entitled Garden of Allah.  The Garden of Allah was the title of a 1904 novel by Robert Hichens and was one of the most popular novels of the early 20th century. So popular that it went through forty-four editions over the next 40 years. In this work we can see how Parrish was influenced by Pre-Raphaelite painters such as William Holman Hunt

These three candy boxes that Parrish produced for Crane were extremely successful for both Crane’s Chocolates and for Maxfield Parrish. The partnership between Crane and Parrish was mutually beneficial and proved a significant turning point in the illustrator’s career.  From this point onwards, Maxfield Parrish declared that he would only accept commissions, like the one with Crane, which interested him artistically.  Maxfield Parrish’s illustrations on the chocolate boxes proved so popular that the Crane company issued them as art prints, which could be ordered through a form enclosed in the gift boxes.  In Coy Ludwig’s biography Maxfield Parrish he wrote:

“…Crane regarded the art prints as a means of building prestige for his firm and a moderately profitable service he might provide for his clients who wanted replicas of the candy-box illustrations suitable for framing…The demand for reproductions of Parrish’s decorations grew so great that Crane arranged for the House of Art, the New York fine arts publishing and distributing firm, to handle the marketing of the prints…Crane’s reproductions helped to create an unprecedented public demand for Parrish’s paintings in the art-print market and with it the assurance of continued financial security for the artist…”

Daybreak was an iconic painting completed by Maxfield Parrish in 1922.  Parrish was commissioned to paint Daybreak by the art publishing firm House of Art in August 1920. The commission of Daybreak was motivated by the art-print successes of the three illustrations Maxfield Parrish had completed as decorations for Crane’s Chocolates Christmas gift boxes from 1916 to 1918.  One example of this was his painting of Cleopatra which was the cover illustration of Crane’s Chocolates 1917 Christmas gift box, and it signified the artist’s successful incursion into commercial advertising.

Daybreak was Maxfield’s first work commissioned solely for reproduction as a colour lithograph print and became one of the most reproduced images in American history, according to the auction house, Christie’s catalogue, it was estimated that one of every four households in America had a copy of the work, making it a national sensation and cultural phenomenon.

Meanwhile, Maxfield was preoccupied with completing illustrations for Louise Sander’s book, Knave of Hearts and did not start to work on Daybreak until the summer of 1922.  He had to placate Stephen Newman, the co-owner of House of Art, saying:

“… As to the ‘great painting,’ its beautiful white panel is always on the wall before me, and I am thinking great things into it. I have thought so many beautiful things into it that it ought to make a good print just as it is. Have patience…”

One thought on “Maxfield Parrish. Part 3.”